Exxon to accelerate buybacks after biggest profit since 2014

(Bloomberg) — Exxon Mobil Corp. will accelerate the pace of a $10 billion share buyback after posting the biggest profit in almost eight years amid a broad rally in energy prices. 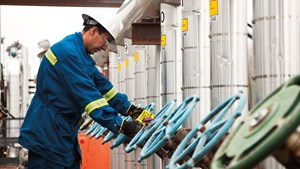 Net income adjusted for one-time items was $2.05 a share, 12 cents above the average of analyst estimates compiled by Bloomberg. Exxon paid down $9 billion in debt during the fourth quarter, reducing outstanding obligations to pre-pandemic levels. The shares rose as much as 5.9% to the highest intraday level since April 2019.

One measure of cash flow more than tripled to almost $18 billion during the final three months of 2021 compared with a year earlier as oil and gas prices soared. Exxon and its four supermajor peers probably raked in record free cash flow during 2021, according to analyst forecasts, and with energy prices still rising this year may be even more bountiful.

The boost in cash flow will allow Exxon to increase the pace of a $10 billion share buyback previously announced as taking place over two years. Now, the company expects the buybacks to be “faster than that 12-24 month pace,” Chief Financial Officer Kathy Mikells said during a conference call.

Exxon also expects to grow oil production in the Permian basin of West Texas by 25% in 2022 after increasing by the same amount from 2020 to 2021. That dwarfs the 10% increase that rival Chevron announced last week and is the latest sign that U.S. shale is ramping up again after years of restraint.

Exxon’s results come a day after the driller disclosed yet another belt-tightening move, this time involving shuttering its corporate headquarters in suburban Dallas and consolidating those offices near Houston. Exxon shares have risen more than 20% this year, capping an almost 50% advance in 2021 for the best annual performance in at least four decades.

While some observers have raised concerns about Exxon’s long-term commitment to fossil fuels, in the near term the company is profitably harvesting older reserves and replacing them with high-margin barrels from new discoveries in places such as Guyana.

In 2021, Exxon garnered ample cash to repair its balance sheet, pay the S&P 500 Index’s third-largest dividend and pledge to restart share buybacks. It’s a remarkable financial turnaround for the oil giant a year after it incurred its first annual loss in at least 40 years during the darkest days of the pandemic.

Exxon is under pressure to do more on climate change, especially after activist investor Engine No. 1’s success last year. Its recently announced ambition to eliminate emissions from its operations by 2050 is one step in that direction but the company will also have to allocate more cash to its low-carbon business over time, especially in areas like carbon capture and biofuels.