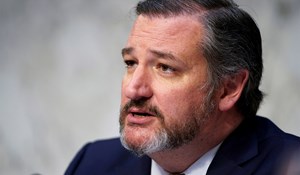 WASHINGTON (Bloomberg) --Senator Ted Cruz is delaying William Burns’s confirmation as CIA director to demand that the Biden administration do more to halt the Nord Stream 2 gas pipeline, as Republicans seek to ramp up pressure now that construction has resumed.

The move by the Texas Republican will delay, but not stop, Burns’s path to lead the Central Intelligence Agency. Any senator can drag out the final vote, but the Senate Intelligence Committee unanimously approved Burns’s nomination, and he’s expected to win confirmation easily.

Cruz argues the administration must sanction more ships and companies that Republicans say are clearly helping with construction. He’s demanding that the State Department issue a new report -- before the next one is due in less than three months -- identifying entities that are subjecting themselves to sanctions by working on the pipeline that would bring natural gas from Russia to Germany.

“Senator Cruz has publicly and privately stated he will use all of his prerogatives as a senator so that the Biden administration sanctions the ships and companies building Nord Stream 2,” Cruz spokeswoman Jessica Skaggs said. “He’ll release his hold on Burns once the State Department transmits an interim report and imposes those sanctions.”

The tactic is intended to draw attention to the Republican position that the Biden administration isn’t doing enough to halt the project, despite White House assurances that it’s doing all it can.

The administration argues that it needs more time to assemble evidence of all those involved in the construction and has suggested more sanctions are coming. Rumors that the administration is in talks with Germany to allow the pipeline’s completion are false, according to two other people familiar with the issue, who asked not to be identified discussing private deliberations.

One notion is to delay construction until the summer, when German elections could usher in a new government that could kill the project.

“What we have said, and we have made very clear to partners all across Europe -- whether that’s Ukraine, whether it’s Poland, whether it’s others, whether it’s Germany -- that the United States has profound concerns with this pipeline,” State Department spokesman Ned Price said in a briefing on March 2.

Cruz has also repeatedly brought up the matter in meetings with several nominees, including President Joe Biden’s pick for deputy secretary of state, Wendy Sherman, and Samantha Power, his choice to run the U.S. Agency for International Development. He’s urged nominees to seek a classified briefing and suggested that they specifically ask for intelligence that shows that the project is highly vulnerable, according to one of the people.

Republican senators have argued that the Biden administration is giving Russia a window of opportunity by not sanctioning every entity involved in the pipeline’s construction.

“We call on the administration to correct its misguided actions by quickly and fully implementing the sanctions mandated by U.S. law,” 40 of them wrote to Biden in a March 3 letter.