SHARJAH -- Pearl Petroleum Company Limited, the consortium led by Crescent Petroleum and Dana Gas of the UAE, has signed a new 20-year Gas Sales Agreement (GSA) with the Kurdistan Regional Government to enable production and sales of an additional 250 MMscfd, which the consortium aims to produce by 2021 as part of their expansion plans in the Kurdistan region of Iraq (KRI), in order to boost much needed local domestic electricity generation.

Pursuant to the Settlement Agreement reached between the parties in August 2017, this new gas sales agreement was signed on Feb. 19, 2019, by Dr. Ashti Hawrami, Minister of Natural Resources on behalf of the Kurdistan Regional Government, and Majid Jafar, CEO of Crescent Petroleum and board managing director of Dana Gas, on behalf of Pearl Petroleum. All approvals for the agreement, including by the the Kurdistan Region Council for Oil & Gas Affairs and the Board of Pearl Petroleum, have since been granted, with project work now under implementation. 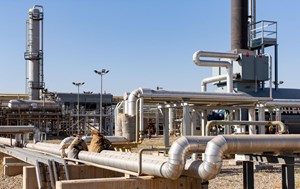 The Kurdistan Gas Project was established in 2007 as Dana Gas and Crescent Petroleum entered into agreement with the Kurdistan Regional Government (KRG) for certain exclusive rights to appraise, develop, produce, market, and sell petroleum from the Khor Mor and Chemchemal fields in the Kurdistan Region of Iraq (KRI). Production from the newly built plant in Khor Mor began just 15 months later, in October 2008. In 2009, Pearl Petroleum was formed as a consortium with Dana Gas and Crescent Petroleum as shareholders, and with OMV, MOL, and RWE joining the consortium subsequently with a 10% share each.

Gas sales commenced late in 2018 under a gas sales agreement signed in January of that year, and all payments have been received in a timely manner in full, which gives confidence for the investment and expansion plans currently underway by the consortium. The Kurdistan Gas Project, which recently commemorated 10 years of continuous production, supplies natural gas from Khor Mor field by pipeline to power plants in Bazian, Chemchemal and Erbil, as well as LPG and condensate, which are sold in the local markets.

In August 2017, Pearl Petroleum reached a full and final settlement with the KRG of the arbitration between them, including settlement of past receivables and committing to expand their investment and operations in the region. These expansion plans include the multi-well drilling program currently underway in both Khor Mor and Chemchemal fields, as well as installation of additional gas processing and liquids extraction facilities. The fields are operated jointly by Crescent Petroleum and Dana Gas on behalf of Pearl Petroleum.

Total investment in the Kurdistan Gas Project to date exceeds $1.6 billion, with total cumulative production of over 260 MMboe, delivering billions of dollars in fuel cost savings and wider economic benefits for the Kurdistan Region and Iraq, as a whole. That impact will continue to grow as production capacity expands in the coming years.