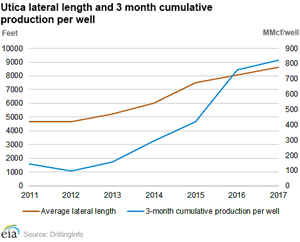 Despite steadily increasing production, Utica’s rig count and prices in the region have fluctuated. From 2011–2014, as Dominion South and other nearby hub prices remained higher than $2.75/MMBtu, the average yearly rig count kept rising, reaching an average of 43 rigs in 2014. However, by 2016, the rig count fell to 14 rigs, and prices declined to $1.50/MMBtu. New pipeline projects added takeaway capacity from the region in 2017 and both rigs and prices rose, though they remain lower than previous levels.

Utica’s natural gas production increase has been supported by higher per-well production from new wells. Similar to production activity in other regions, such as the Marcellus and the Haynesville, drilling operators have increased the lateral length of horizontal wells. From 2011 to 2017, the average length of laterals increased from 4,649 ft to 8,628 ft, according to DrillingInfo.