LONDON (Bloomberg) -- Oil fell in New York, erasing earlier gains, after Saudi Arabia’s production last month was said to have risen above the cap it agreed on with fellow OPEC members. 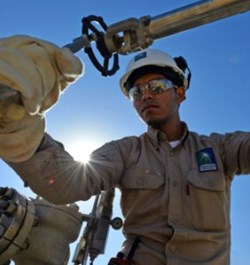 Futures slid 1% after advancing 1.2% earlier. Saudi Arabia told OPEC it raised output by 190,000 bpd to 10.07 million in June, a person familiar with the matter said, higher than 10.058 million limit set last year. That’s the opposite of the “shock and awe” strategy of deeper cuts Goldman Sachs Group said producers should be adopting.

Oil is in a bear market amid concern that rising global supply will offset curbs by OPEC and its partners including Russia. U.S. crude inventories remain more than 100 MMbbl above the five-year average. The nation’s shale output can expand further with prices in the mid-$40s, according to JPMorgan Chase. Increases from Libya and Nigeria are also diluting the impact of supply curbs.

“For sure, it does not help the current bearish sentiment,” Ole Sloth Hansen, an analyst at Saxo Bank A/S in Copenhagen, said of Saudi Arabia’s reported production level. “Market activity is thin in summer so any news, especially the bearish ones, receives attention.”

Oil may slip below $40 a barrel unless there are sustained inventory declines and a drop in the rig count, while evidence of further OPEC actions could help prices rally, Damien Courvalin, an analyst at Goldman, said in a note dated July 10.

U.S. crude stockpiles probably fell by 2.85 MMbbl last week, a Bloomberg survey showed before an EIA report Wednesday. Crude stockpiles at Cushing, Oklahoma, the delivery point for WTI and the biggest U.S. oil-storage hub, probably slid by 1.4 MMbbl last week, according to the forecast compiled by Bloomberg. The OPEC-led agreement to cut output is working, Russian Energy Minister Alexander Novak reiterated on state-run Rossiya 24 television. A type of U.S. crude pumped in the Gulf of Mexico is proving to be more attractive in India, the fastest-growing oil market, compared with Middle East staples on offer.