HOUSTON -- Up to $15 billion in increased spending will flow into the non-OPEC shale market in 2017, according to a new analysis from Rystad Energy. This incremental change comes after OPEC’s decision to cut production by 1.2 MMbpd. 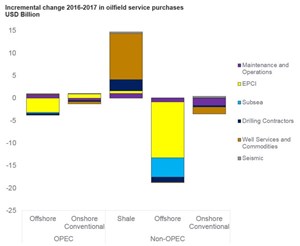 Non-OPEC shale well services are best positioned with an estimated $10 billion of additional spending, followed by drilling contractors with $2.5 billion, assuming 10,000 wells are to be drilled and completed.

“2016 has been an even tougher year than the previous for most service companies, and revenue reductions range from 30% to 50% for onshore North American service companies. OPEC cuts will rescue a lot of these businesses,” said Audun Martinsen, V.P., Oilfield Service Analysis, Rystad Energy.

The study also shows that offshore suppliers will continue to struggle, with the overall offshore market to be reduced by $19 billion in 2017 as compared to 2016. EPCI and subsea purchases are most impacted with more than $12 billion and $4 billion of reduced spending, respectively.

“2017 will follow a lot of the trends seen in 2016, with more market consolidation and tighter collaboration between service companies and operators. However, OPEC production cuts will turn the needle on the FID for many projects in shale and offshore, which will eventually generate more transparency on future activity and revenue,” concluded Martinsen.