LONDON (Bloomberg) -- More than a year after oil began to tumble, Europe’s largest oil company said the first signs of a recovery are only now starting to show. 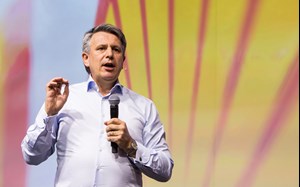 “In May and June, we saw the first signs of reduced production,” Van Beurden said at a conference in London. “This could entail higher prices, if OPEC at the same time can come to an agreement” on how to keep a lid on supply.

Crude has dropped more than 50% since June 2014 amid a global glut, exacerbated by the November decision of the Organization of Petroleum Exporting Countries—led by Saudi Arabia—not to reduce output. The price slump has forced oil companies including high-cost shale drillers in the U.S. to cut costs and idle rigs.

“It will take some more time to rebalance demand and supply,” Van Beurden said. “After this happens, Saudi Arabia’s strategy and cohesion within OPEC will remain key uncertainties.”

Shell and European competitor BP Plc have said on several occasions they’re bracing for “lower for longer” prices as the oversupply persists, dragging crude to a six-year low in August. With major producers cutting investment and world oil demand expected to grow, the market will eventually strengthen, according to OPEC Secretary-General Abdalla El-Badri.

OPEC sees some light at the end of the tunnel, El-Badri said at the conference. The market is experiencing a price cycle like those of the past 50 years and the current slump won’t last more than two years, he said.

“It remains uncertain how fast prices will recover and at what level they will settle,” Van Beurden said. Yet with capital costs coming down, it’s likely that margins will improve and that the industry will “reset itself,” he said.