Even though drilling took a dive during 2019, the U.S. became the world’s largest crude producer, reaching a record-high 12.87 MMbopd in December, and averaged 12.2 MMbpd for the year. To avoid an oil price crash, OPEC+ decided to cut production, with 1.195 MMbpd pledged. Actually, production in December was only 44.081 MMbpd, resulting in a 1.569-MMbpd reduction. The cutbacks were enough to balance markets and keep benchmark prices relatively steady.

Geopolitical factors also caused occasional price spikes, but oil prices, on the whole, remained within a fairly constant range between the low $50s/bbl and $60/bbl. The industry’s top-performing region remains the Middle East, supported by multi-year development programs. And while Qatar has been the world’s leading LNG exporter, Australia may claim that title shortly.

After two years of improvement in global drilling outside the U.S., the number of wells drilled last year fell 4.0%, to 43,734, Table 1. 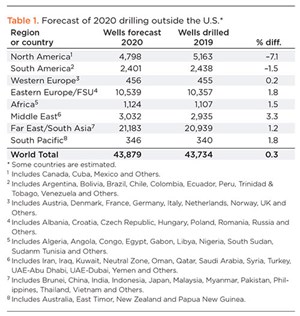 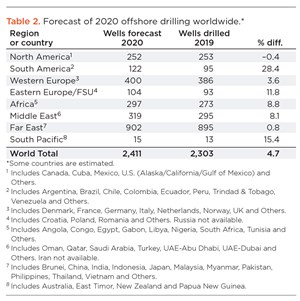 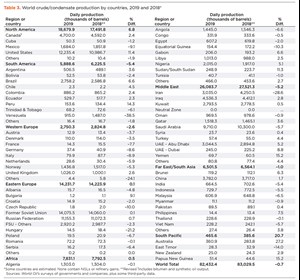 Outside the U.S., North American drilling is slated to decline 7.1% during 2020, with Canada down and Mexico up. Offshore activity in these two nations should rise 16.4%, to 85 wells.

Canada. After a wild ride for producers over the last several years, the Canadian E&P outlook is a bit better for 2020. What’s really needed, however, is approval of pipeline projects that would add nearly 600,000 bpd of shipping capacity. In the short run, the Canadian Association of Petroleum Producers expects drilling to decline another 8.4% during 2020, with offshore work remaining nearly flat. 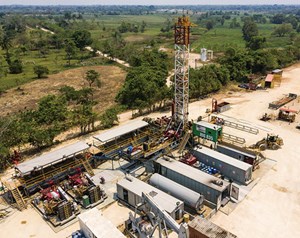 Fig. 1. Mexico’s drilling was up significantly during 2019, as exemplified by 13 wells drilled on contract by Simmons Edeco in southeastern Mexico. The Calgary-based firm subsequently won a second contract for additional drilling in the area. Image: Simmons Edeco.

Furthermore, an effort by state firm Pemex to drill new wells at 20 “priority” fields by using smaller, local service contractors has faltered, and the company expects to re-bid some of the work later this year. Meanwhile, AMLO appears bent on restoring Pemex to its pre-reform status. He said that he would lower the company’s tax burden in 2020 and contribute government funds toward paying down near-term bonds. Accordingly, we expect Mexican drilling, at least the Pemex share, to be up 20.9% during 2020, Fig. 1.

This region has good resources, but it suffers inconsistent performance. Yet, drilling appears close to turning the corner, with just a 1.5% decline in wells forecast. Offshore activity is on the rebound, slated to rise 28%.

Brazil leads in offshore development. The country reportedly will deploy 21 FPSOs between 2019 and 2025. These vessels’ crude oil production capacities are expected to total 2.5 MMbopd during that period. Accompanying this uptick in production, we expect to see a 20% increase in Brazilian drilling. State-owned Petrobras operates most of the current development.

Venezuela. Despite claiming the world’s largest proved oil reserves, Venezuela’s production continues a rapid descent, slumping to a 75-year low last year at 792,000 bopd. U.S. sanctions crippled the economy and cut off access to U.S. refiners. According to Baker Hughes, the average number of active rigs fell from 78.7 in 2013 to just 24.5 during 2019. Given the current governmental situation in Caracas, Venezuela’s E&P sector is not likely to see any relief in the near future.

Guyana has become South America’s exploration success leader, producing the highest number of discoveries of any South American country during third-quarter 2019. Not only has ExxonMobil reported 16 discoveries on the Stabroek Block, to date, but two recent discoveries by Tullow Oil in the neighboring Orinduik Block have opened an entirely new Upper Tertiary oil play.

Norway. Norwegian oil production received a boost, when Johan Sverdrup field went onstream in October. Production should reach 440,000 bopd by this summer, generating a 33% increase in Norway’s production during first-half 2020. Equinor expects Johan Sverdrup to deliver more than $100 billion in revenue over the next 50 years.

United Kingdom. The 32nd and largest offshore licensing round for the UK Continental Shelf concluded in December, attracting 104 applications that covered 245 blocks and partial blocks. Licenses should be let during second-quarter 2020. Elsewhere on the shelf, Equinor started production at Mariner field, which should produce more than 300 MMboe over 30 years. On land, drillers were dealt a significant blow at the end of 2019, when the Conservative UK government effectively banned hydraulic fracturing in new wells. We anticipate British wells drilled, both offshore and onshore, will remain even with 2019’s levels.

Development of gas export pipelines, and the production to fill them, remains a key interest for operators in Russia and beyond. Wells drilled in Eastern Europe and the FSU, combined, are projected to increase 1.8% during 2020. The U.S. economic sanctions against Russia are bringing offshore drilling to a virtual standstill in that country.

Russia continues to focus on projects in its far eastern region as a means to becoming a dominant player in global gas and LNG markets. Rosneft and Novatek PJSC, the country’s largest LNG producer, approved projects with an export capacity of 26 MM tons of LNG per year, doubling existing capacity. Additionally, Gazprom completed 176 gas production wells at its Chayandinskoye field in Yakutia, to fill its Power of Siberia gas pipeline servicing Chinese markets. We expect a 1.5% increase in wells drilled.

Other Eastern European and FSU countries. Exploration is picking up in the Balkans, with Bosnia-Herzegovina offering its first-ever exploration licensing round. The country joins Croatia, which offered acreage in 2019. Meanwhile, in Azerbaijan, drilling should be up 13% this year, with increases expected both onshore and offshore. Kazakhstan will be up modestly, anchored by additional development drilling at Tengiz field. The FSU countries, other than Russia, will be up 3.9% this year.

Egypt’s E&P market is doing well. According to one report, Egyptian General Petroleum Corp. had the highest number of oil and gas finds globally during third-quarter 2019, three of which were in the Western Desert basin. Given these recent successes and other ongoing projects, World Oil anticipates a nearly 4% drilling increase.

Nigeria’s offshore sector is building momentum, with four FPSOs planned for deployment by 2025. Nigeria has been working to boost oil output, as well as keep up with rising natural gas demand. As of December 2019, plans for a $10-billion expansion of Nigeria LNG, Africa’s largest natural gas plant, were moving forward. World Oil anticipates a 5.8% increase in drilling activity for 2020.

Angola. Behind Brazil, Angola expects to deploy the second-highest number of FPSOs by 2025. Five vessels are planned during that period, which should boost oil production after several years of decline. Following a recent licensing round for 10 frontier offshore blocks, Angola may increase drilling nearly 3.0%.

Libya. Between civil war and export blockages, Libya’s E&P activity has decreased dramatically. Since an eastern military commander halted exports at ports under his control, the OPEC nation’s output has dropped approximately 800,000 bopd from 1.174 MMbopd. If export blockages finally cease, then drilling activity should rise modestly.

The Middle East continues to be a stellar E&P performer. Thanks to the steady development programs of various NOCs, regional drilling has remained at an historically high rate for several years. For 2020, Middle Eastern drilling should increase 3.3%. Offshore drilling will be up 8.1%, Fig. 2. 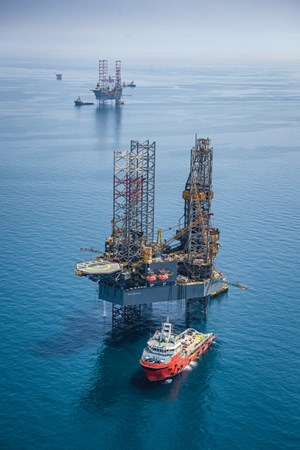 Fig. 2. Saudi Arabian activity will be a significant component of Middle Eastern drilling during 2020, as illustrated by this scene of jackup rigs at work in Hasbah field. Image: Saudi Aramco.

Saudi Arabia remains the global oil exports leader. A September 2019 attack on Saudi Aramco’s Abqaiq oil processing facility and Khurais oil field, however, resulted in the largest daily spike in global oil prices in the last decade. Nevertheless, the company reportedly restored the field’s production to full capacity by the end of the month. The country’s heavy development work and associated drilling continue, although drilling will be down 6.0%.

Iraq. Despite tensions with Washington of late, Iraq remains the Middle East’s second-largest oil producer. In spite of political tumult and requisite OPEC cuts, Iraq expected to see a 15.8% drilling increase this year.

Oman, the largest Middle Eastern driller, is home to a significant new exploration opportunity after BP and Eni signed an E&P agreement for Block 77 in July 2019. Block 77 is situated east of BP’s Block 61, where the Khazzan and Ghazeer gas projects are found. Meanwhile, an 8.0% increase in drilling is anticipated.

The Far East is expected to post a 1.2% gain in wells. However, if China is filtered out, then the region will barely post an increase, at 0.7%.

China. As the world’s biggest oil importer, China could see a significant dip in demand growth this year. State firm CNPC said demand could slip by as much as half of last year’s level, amid the ongoing trade dispute and Coronavirus epidemic. The country’s oil demand should still grow, at perhaps 2.4%, CNPC told Bloomberg, but there is no way to be sure. For now, Chinese drilling should grow at about 1.2%.

Indonesia. State firm PT Pertamina, however, has taken recent steps to reduce oil imports. In November, an overhaul of the company’s management team was ordered by Indonesian President Joko Widodo. He also announced that steps would be taken to process more resources domestically to boost export revenue. This year, we expect a 3.3% drilling increase.

Australia has been one of the world’s leading LNG producers. According to the U.S. EIA and Australia’s Department of Industry, Innovation, and Science, Australia is on track to surpass Qatar as lead producer. And operators continue to look for more oil, too, so drilling is expected to increase 1.2% during 2020.

Papua New Guinea’s Papua LNG plant was anticipated for development in conjunction with Exxon-operated PNG LNG, through an expansion of the existing plant in Caution Bay. However, the government walked away from negotiations on the $10-billion project in January, putting the project on hold. Nevertheless, PNG drilling will be up slightly.