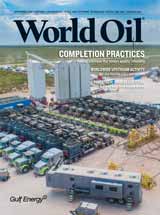 Quality and reliability: Finding the balance

U.S. drilling wanes, trend predicted to continue in second half

Craig Fleming Kurt Abraham
Disappointing results in the shale plays, along with a growing number of DUCs, indicate a reduction in activity is prudent to focus on completing idle wells to recoup investments, rather than loading more orphans in the queue.

Canada facing a multitude of issues and political uncertainties

Robert Curran
Canada’s oil and gas industry is locked in a protracted downturn. At the halfway point of 2019, most signs now point to a bearish outlook, with the oil patch at the mercy of forces beyond its control.

E&P activity outside the U.S. to continue moderate growth

Stubbornly high oil supplies continue to constrain global drilling figures, but a renewed focus on reserve replacement, coupled with emerging offshore and shale opportunities outside the U.S., show opportunities for growth in the future.

Jim Redden
A fledging Appalachian basin operator hopes its more established brethren will follow its lead and abstain from chasing growth amid a bleak gas price environment that shows no sign of strengthening anytime soon.

Ron Bitto
A flurry of deepwater discoveries in the Atlantic off Guyana’s coast has changed the future for the small South American nation.

Disruption and digital: Business transformation should drive technology adoption, not the other way around

Jim Redden
Talk freely among yourselves

Jim Redden
Hand me the remote

Mark Patton
The power of water

Craig Fleming
In 1982, I started working for a small independent that was making a living, drilling oil wells in the “mature” Seminole field of eastern Oklahoma.
News & Resources

Craig Fleming
The unrelenting trade dispute, festering between the U.S. and China, took a toll on crude prices in August, with WTI, Brent and Dubai Fateh dropping 4%, 7.1% and 9.4% respectively.

Dr. Stephen A. Holditch, an accomplished petroleum engineer and fixture of Texas A&M University faculty, passed away on Aug. 9, 2019.

Halliburton has introduced 3D reservoir mapping, an LWD capability that provides a detailed representation of the subsurface to improve well placement in complex reservoirs.