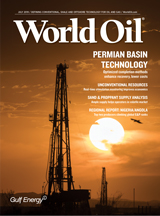 Dirk Lee Jody Kindred
In unconventional wells, coiled tubing has traditionally been the preferred method for drilling out frac plugs after hydraulic stimulation.

What’s going on down there?

Oscar Vasquez Sam Young
Use of electromagnetic monitoring to image unconventional wells in shales can identify problems with well isolation and frac design.

Hege Kverneland
We all acknowledge the increasingly important role that data will play in the oil and gas industry moving forward, but overuse of the term “Big Data” has made it tempting to think of it as more of a buzzword than an industry-changing phenomenon.

Disruption and commoditization of the proppant industry

Michelle Stribling Brian D. Olmen
The U.S. upstream industry’s shift to quantity over quality has resulted in an oversupply of sand and proppants, resulting in price deflation, a situation complicated by operators’ preference for supplies to have closer proximity to wellsites.

David Blackmon
Elected officials are doing their best to kill off the golden goose in two states that have benefitted mightily from the shale revolution.

Staff Staff
As the play’s oil production continues to advance, several pipeline projects may help to make the transportation of that crude easier.

Kurt Abraham
Just another day at the wellsite

Emily Querubin
Talos Energy has completed its appraisal program for the Zama discovery on Block 7, in the offshore portion of Mexico’s prolific Sureste basin.

Craig Fleming
Despite escalating hostilities between the U.S. and Iran, which included two oil tanker attacks and a downed U.S. surveillance drone, crude benchmarks plummeted in June, with WTI, Brent and Dubai Fateh dropping 9.3%, 10.5% and 10%, respectively.

Emily Querubin
Fugro says it has contributed more than 110,000 km2 of high-resolution bathymetry data in the North Atlantic Ocean to help improve the quality and coverage of seabed mapping in the region.