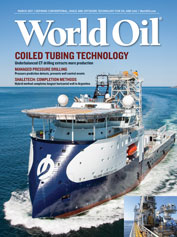 Stephen Prensky
This review is based on published technical papers and publicly available literature. The author does not endorse any specific technologies or service providers. The logging systems may be available as commercial services, or still in development and testing phases.

Ryan Allen
Using a ball-activated sliding sleeve system, an operator completed an exploratory well in the Vaca Muerta shale that has the country’s longest lateral and highest initial production rate

Emily Querubin
Recovering from a six-year drilling low that was reported last May, African E&P is slowly picking up the pieces. The region has seen numerous setbacks, despite having the potential to become one of the leading oil and gas producers and exporters in the world. Much of East Africa is riddled with severe debt and economic unrest, impeding investment and the development of infrastructure.

Emily Querubin
The American Association of Petroleum Geologists (AAPG), one of the world’s top geological societies, will be holding its Annual Convention & Exhibition (ACE) on April 2–5, at the George R. Brown Convention Center in downtown Houston, Texas.

Mohamed Farouk George Arnold Raul Villegas
To acquire a high-quality core in as few runs as possible, and reduce operational costs, a provider must maximize ROP while ensuring efficient, safe surface handling of the rock sample and coring assembly. To satisfy these requirements, HT30 Max, a full-gauge core barrel system with jam mitigation technology, has been introduced.
Columns

William (Bill) Head
Where to find results of other people’s money!

Jacques Sapir
Oil prices and the process of ruble appreciation

Emily Querubin
People in the industry

Emily Querubin
Companies in the news