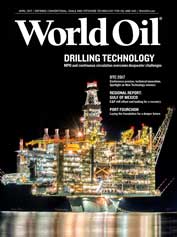 Dag H. Breivik Gerald Hollinger Christophe Dupuis
Upfront planning and early collaboration between the operator and a service company, to design solutions for the life of the well, are proving beneficial in efficiently and cost-effectively meeting key objectives in this remote, Arctic frontier field.

Emily Querubin
The oil and gas industry’s largest equipment exhibition is coming to Houston once again, May 1–4.

Delivering on the promise of digital transformation

What a difference an election makes

David Blackmon
The upstream oil and gas regulatory structure has been turned upside-down on the federal level, and what was once thought nearly impossible, in terms of certain projects, now seems far more likely.

J. P. Chia
As offshore platforms become larger and heavier, the use of floatover installations is coming back into favor, because they handle much greater loads, require fewer vessels and cranes, and can save money in the long run.

Kurt Abraham
CHIBA, JAPAN – When the folks at dmg events picked the Tokyo area a couple of years ago as the site for Gastech in 2017, they had no idea of the irony that their choice would take on as the conference/exhibition got underway.

William J. Pike
A good friend (who shall remain nameless) and I were talking the other day. Together, we have nearly 90 years of experience in the upstream industry. Our conversation soon turned to interesting technological advancements that we had seen and been involved in.

David Reid
I believe there are four technologies coming into play now that will enable significant breakthroughs in improving the cost model for drilling a well.

William (Bill) Head
I am being asked constantly, “what will the oil price be in six months?” So far, my guess is correct, but if I knew this with any certainty, I would be buying puts or calls, not writing about it.

Craig Fleming
Several major international energy companies plan to transition their business models in the next several decades to a mix of renewables and traditional fossil fuels.

Don Francis
Marvin Gaye wasn’t an oil and gas technology researcher, as far as I know, but the title of his best-known album easily could be about a flyover of activity, in several intersections of that world.

Oil and Gas in the Capitals

Ron Bitto
Now that onshore activity is gaining momentum, shale is back in the headlines.

Jim Redden
There's a new sheriff in town, and operators have high hopes that he and his deputies will take more kindly to their Gulf of Mexico drilling programs than the constabulary they replaced.

Emily Querubin
Bruce Reichert was born and raised in Minnesota, a place he says is as far away from the oil patch as you can get.
News & Resources

World of Oil and Gas

Industry at a Glance

Craig Fleming
In spite of 106% compliance to pledged production cuts by OPEC countries, world crude inventories continued to build and remained above their five-year average. Low seasonal demand, and rising non-OPEC sources, limited the impact of the reductions on global supply drawdowns.

People in the Industry

Emily Querubin
Weatherford International has appointed Mark McCollum as president and CEO, as well as a member of the company’s board of directors.

Companies in the News

Chett Chiasson
This phrase encapsulates the strategy we have long embraced at Port Fourchon.

Jim Redden
The stubborn down cycle in offshore drilling activity has failed to dissuade the management of southern Louisiana’s Port Fourchon from sticking to its long-range game plan.

Fingers crossed for next segment of LA-1

Jim Redden
The next segment in the nearly 20-year effort to build the elevated and storm-proof Louisiana Highway 1 (LA-1) corridor from Golden Meadow to Port Fourchon could go out to bid this year.
Technology at OTC

Alex Endress
The oil field continues to push performance by inventing new offshore drilling and subsea technologies, including automated technologies that improve operational safety and efficiency, as well as more reliable technologies that save time and capex.

Offshore advances address drilling and production, as well as data

Staff
The majority of our 2017 collection of new technologies and next-generation improvements on existing products is almost split evenly between drilling and production applications, with several items pertaining to completions.